The Legend of Poor Cow and his Shadow 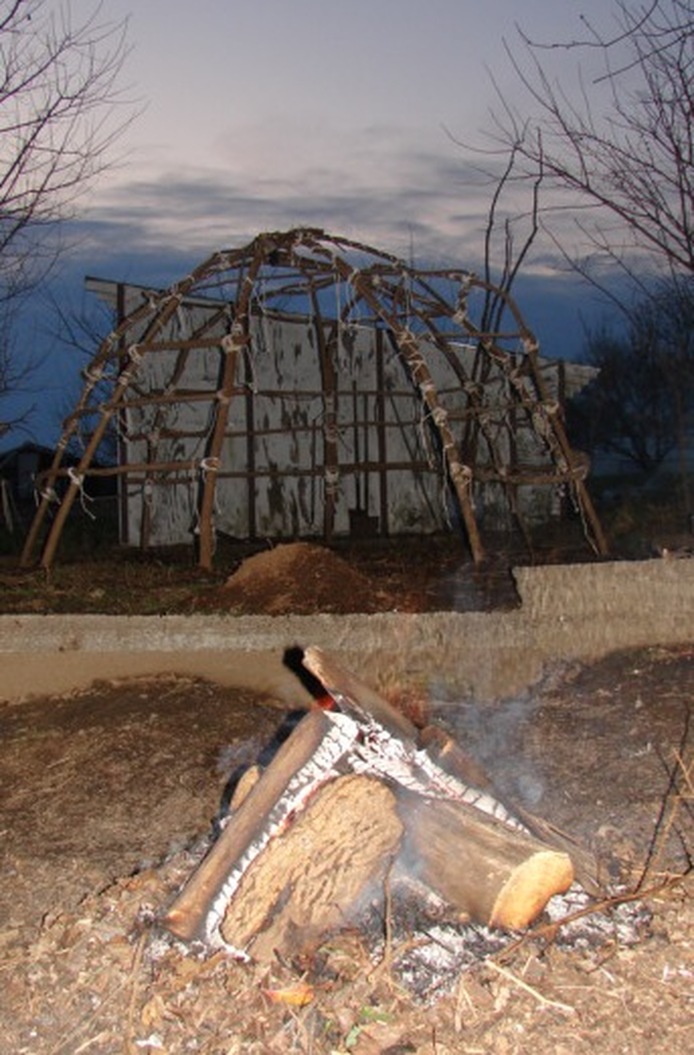 Sweat lodge, preparing for a ceremony, photo copyright 2010 Denise Alvarado, All rights reserved worldwide
In the Voodoo Hoodoo Spellbook, I take some time to discuss the relationship between Native Americans and Africans and African Americans on New Orleans Voodoo and Hoodoo. On pages 15 through 18, I introduce the Mardi Gras Indians and point out that they are perhaps one of the most unique aspects of New Orleans culture, particularly during Mardi Gras and St. Joseph's Day celebrations:

With their elaborate costumes and fabulous performances, the Mardi Gras Indians' flamboyant displays cause the average onlooker to miss the important role they play in the history and shaping of New Orleans Voodoo hoodoo. Their contributions to the enduring Voodoo hoodoo tradition lies in the transmission of cultural knowledge via chants, dance and music. Their authentic African rhythms are those that are used in the rituals and celebrations of major Voodoo holidays and rituals. (Alvarado, 2011, p. 15).

For this article, I am going to depart from the Mardi Gras Indians and further discuss Native American influences and similarities with African traditions. I would like to point out the use of story-telling as a means of teaching. For those in the African-derived traditions there are the patakis. For those in Native traditions, there are the medicine stories. As medicine people we learn these stories and share them in the appropriate times. When someone comes to us for advice, sometimes it is best to not give an answer but to provide some advice - often in the form of a story - that provokes thought and introspection. That way the person is directed to look inwards and to the Ancestors for the answers rather than outwards.

And now, let me share with you a medicine story.
Poor Cow felt very sorry for everyone in his camp. He saw Many-Horses, who had a broken leg and he said, "Oh poor Many-Horses, how will he get through the winter with a broken leg?" Then he saw Amy White Buffalo, who could have no children and he said, "Oh poor Amy White Buffalo, what will become of her if she cannot bear children?" And so Poor Cow was sad for everyone and felt pain for them all. He was the ultimate empath and intuitive. Then one day he noticed that he had lost his Shadow. He went to the medicine chief of the camp and asked him, "Oh Great Chief, I am sad for I have lost my shadow. What shall I do?" The Great Chief said, "Poor Cow, that is very sad. Why don't you go into the sweat lodge and find your shadow?"

And that's what Poor Cow did. He went into the medicine lodge, found his shadow, and died.

Lesson: Never walk in the shadow of a sorcerer or you will die. There are many ways to die. There comes a time when you have to own your own shadow. Poor Cow lost his shadow because he was weak. He feared too much for himself and others. He couldn't own his own power let alone his own shadow. He wanted to fix others so he didn't have to focus on fixing himself. When he entered the sweat lodge, which is a symbol of sacredness, his physical self merged with his spirit and he was healed. He died to what he had always been - a weak and divided person. He emerged from the sweat lodge a new man.