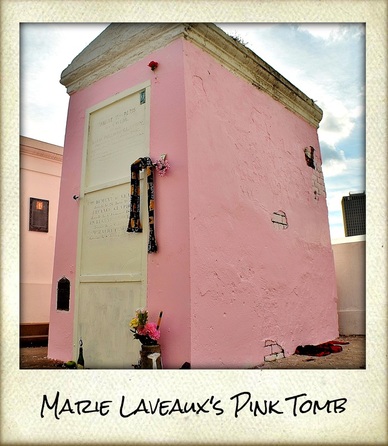 Tomb of the Widow Paris, Marie Laveau Glapion. Photo courtesy of Jeffrey Holmes, 2014.
Some say that painting the Voodoo Queen's tomb Pepto Bismal pink last year was the straw that broke the proverbial camel's back. Truth is, It's been a long time coming.

Only in New Orleans are the Dead given a city in which to reside. Because New Orleans is built on swampland, the Dead cannot be buried in the ground lest they resurface and float away. Consequently, all but the poor and indigent are laid to rest above ground in elaborate crypts, wall ovens and mausoleums. The decorative ironwork and sculptures adorn the plots, making the cemeteries resemble little cities; hence the nickname, “Cities of the Dead.” The cemeteries in New Orleans attract a lot of visitors each year because of their unique, historic character.

St. Louis Cemetery #1 is the most famous City of the Dead. It is the oldest New Orleans cemetery, constructed to replace the older St. Peter Cemetery as the main burial ground when the city was rebuilt after the Great New Orleans Fire of 1788.

St. Louis Cemetery #1 is also the place where the infamous Voudou Queen Marie Laveaux was laid to rest. This cemetery tends to get the most visitors of all the Cities of the Dead in part because of its architecture and history, and in part because of Voudou. People from all walks of life want a glimpse of Marie Laveaux’s final resting place. Voudou adherents from all over the country make pilgrimages to the grave site, a testament to its spiritual significance. Most likely, all visitors want an opportunity to make a wish at her tomb in hopes that their wishes will be granted by the Voudou Queen. It is said that Marie Laveaux’s grave is the second most visited grave site in the United States, falling second only to Elvis Presley.

The tomb of Marie Laveaux is more than just a tourist attraction, however; it is at the heart of New Orleans’ sacred geography. It is the place that connects many sacred sites running the gamut from swamps to churches, shrines, cemeteries, Congo Square, St Louis Cathedral, Bayou St John, and every home where someone lights a candle or says a prayer. Just as the cross marks drawn on her tomb mark the place where the world of the physical and the world of the spiritual intersect, her tomb signifies the place where people from all over the world meet and interact with the spirits of the Dead, as well as with the spirit of the Voudou Queen herself.

In December 2013, the tomb that holds the remains of the Mother of New Orleans Voudou was painted a bright pink. Graffiti of any kind on the great Voudou Queen’s tomb can be a heartbreaking sight for those who honor her.

Even nonpractitioners who simply love the historical significance and beauty of the original architecture found in the cemeteries don’t take kindly to random or targeted vandalism. According to Carolyn Morrow Long, author of A New Orleans Voudou Priestess: The Legend and Reality of Marie Laveau, people have been drawing cross marks on Marie Laveaux’s grave since at least 1928 (as reported in a newspaper article), debunking the popular contention that the practice started in the 1960s with then tour guide Buddy Ansbacher. More than likely, it is older than that. Cross marks are sacred symbols in Voudou and signify the place where the sacred and the profane intersect. Not surprisingly, it didn’t take long for the Xs to reappear after the pink cover-up. Painting the tomb a bright pink color made this incident hard to ignore.

One can’t help but wonder about the motivation behind this event. Early on, local informants reported seeing a small, light-skinned black man walking around town with pink paint on his pants. About two weeks before the pink tomb was discovered, someone (it is unclear whether or not this is the same individual) was caught painting a tomb that is erroneously attributed to the infamous gris gris man and Father of New Orleans Voudou, Dr. John, an ugly yellowish-beige. This tomb is not the tomb of Dr. John as cemetery records indicate Dr. John (Jean Montenee) was buried in St. Roche cemetery. However, it is a popular wishing tomb that also gets covered with cross marks and littered with offerings. Angie Green, director of Save Our Cemeteries, is reported in the Times Picayune as saying, "I didn't think he was a threat. I spoke with him and it seemed he thought he was trying to do the right thing (by covering up the Xs). The police said he was someone they knew, a homeless, mentally unstable kid. So we are pretty sure it was him (who painted Laveau's tomb) but no one knows for sure" (Webster, 2013).

Alyne Pustanio, author of Purloined Stories and Early Tales of Old New Orleans is used to the vandalism. “That tomb is painted more frequently than possibly any other tomb in the New Orleans area specifically because it is continuously defaced with Xs and other markings; tourists, encouraged by "who me?!" tour guides, are the worst offenders."

According to Archdiocesan records, the last known Glapion family member was buried in 1957 and since then, there has not been anyone officially responsible for taking care of the tomb. Other than periodically cleaning up around it and painting over the X marks by the Cemeteries Office, the tomb has been allowed to steadily deteriorate.

The Archdiocese of New Orleans owns and operates St. Louis Cemetery #1 where the tomb is located, but they do not routinely maintain the tomb. The majority of the tombs in the cemetery are individually owned by families who are ultimately responsible for their maintenance and upkeep. If there is no family, there is no upkeep. It is estimated that 75 percent of almost 1,000 tombs in St. Louis Cemetery #1 are orphaned.